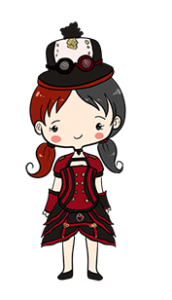 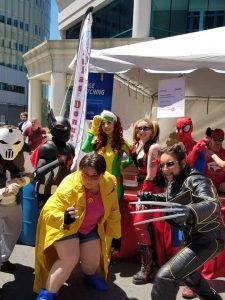 WNY Superheroes and Cosplayers had a blast at the Taste of Buffalo this year. Big thank you to Paula’s donuts for bringing us in. Kids of all ages really enjoyed seeing the different characters! I even ran out of trading cards to pass out! So next year, I would definitely bring more as well as wear costumes that have cards made up.

It also didn’t matter what my costume was, I was baking LOL Sure Susan, wear Black Widow on a 84 degree day XD

Thanks to all the vendors who enjoyed seeing us and gave us free food – Sidelines had AMAZING fried pickles! Bravo! has THE BEST Lobster Bisque

Hopefully, we’ll be back next year! 😀

So, at Flower City I had a little incident with my InJ2 pants and it split along the belt line. Thankfully not in other places 😡

After selling off a few things and getting some monies owed to me, I went ahead and ordered a new one. Im trying a different company, Pro cosplay. I had good recommendations for them and it looks more screen accurate.

Hopefully at the end of this month Ill have a new one. Ironically the old old was delivered this month last year, so its a weird anniversary? o_O 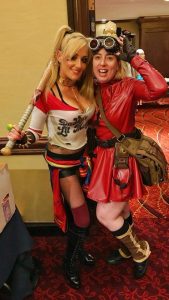 I had a blast at the Cosplaycon hosted by Buffalo Comicon! I don’t think Ive ever been sooo busy at an event! I only got to circle the dealer room once, so I wasn’t able to say hi or have an extended conversation with a lot of folks – sorry! I tried to spend time with QCP and WNYSAC but I was pulled away a lot :O

I had the honor of being asked to be a panelist for cosplay basics. I will probably turn it into an article here soon. The audience was great! Then I was also a cosplay contest judge. There were a ton of great entries – the adult women’s division was especially difficult to decide!

I got to see some very good friends as well! My bestie Jamie from Rochester stopped by, Big Frank, Sally, and David also came! I enjoyed meeting all the new people. Some are even going to join WNYSAC

My Steampunk Star Lord went over surprisingly well. I always worry about my conceptual costumes LOL I even got a sketch of it for buying two prints from Under The Hood (I LOVE THESE GUYS). Word to the wise, wearing compression shirt and shorts under that costume was SMART!!!!! I have a few adjustments to make, but I am so wearing this again. Probably leave Rocket at home next time. Great for photoshoot ideas…not great for walking around with necessarily

All in all, it was a great time, but after doing the Food Truck Friday and the Ride for Roswell, I was 100% spent. My nap needs a nap! LOL 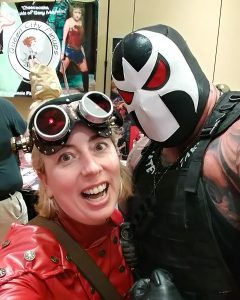 In other news, I need to replace my Injustice 2 Harley. Ive attempted to mend the pants and hopefully it will hold until I can get a replacement ;_; 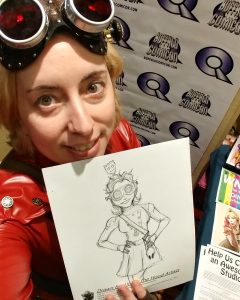 I went to Flower City Comic Con for the first time on the 9th. Lots of great people!

I spent the following week building my steampunk star lord. Im waiting on one final mod part to come in and should be ready to go for the Cosplay Con on the 24th. 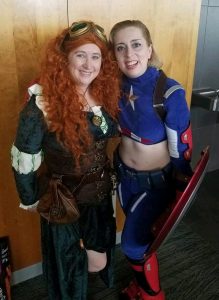 I had a GREAT time today with old friends and new at NFCC this year. We bought a lot of art and walked a ton! It was crazy busy! 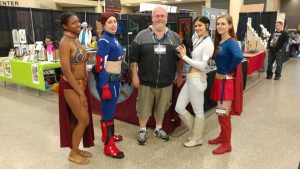 This year we had a booth with Queen City Pinups! We had a blast, seeing old friends and making new ones 🙂 We were interviewed so many times, it was CRAZY! Big shout out to Con Security, Convention Center Security, and Buffalo’s Finest for handling my harasser. You guys are the best!

I ended up reducing my costume changes by two for various reasons. I skipped Lara Croft because 1) weapon policy 2) I really didn’t want to drag around anything extra LOL Besides, I feel quite fierce as American Dream 😀

Big thank you to our Ambassadors for being awesome, hope you ladies had fun! Also very big thanks to our friends for helping us out. Ken for the set up, Shawn and Keith from Queen City Bookstore to relieve Bob and I from booth duty, Mark for being our Penguin, and Kris for giving Scooby pee breaks 🙂

We will be heading to Niagara Falls Comicon on June 2nd socially. Then there will be many, many events leading into Buffalo Comicon’s FIRST Cosplay Con on June 24th. Be sure to check back for updates! 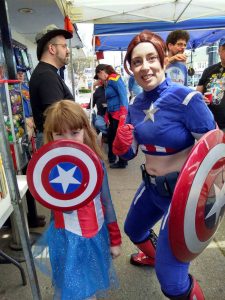 WNY Superheroes & Cosplayers had a fantastic time at the Marvel Meet and Greet on Saturday April 28th at the Hamburg Palace. They were awesome and made a donation to Carly’s Club in our name.

Big thanks to Queen City Bookstore & Buffalo Comicon for providing comic books to pass out to everyone!

The movie was AMAZING and I won’t spoil it for anyone, but I cannot wait until the next part 🙂

I see a number of people online who say they would cosplay except for ________ (fill in excuse). Id like to counter some of these.

BS, youre never too old. Ive seen cosplayers in their 90s. Ill be one of them.

-I need to lose weight

Its all about making the costume flatter you. Pick a character you love and make it work. Don’t worry about screen accuracy – make it so you look amazing!

-I won’t wear it unless its perfect

Then you’ll be waiting a long time. Get over yourself and just do it

Dress them up too! Start them young!

-No one would know the character I pick

You’d be surprised. Also if its an awesome or unique costume, no one will care – they’ll admire it even if they don’t know who it is

I have social anxiety. I THRIVE in costumed settings. Costumes let people know what youre interested in and allows for conversation. They will come to YOU.

Beat them profusely. Or get security to do so. Cosplay is not Consent

Neither did I until about two years about. I modified store bought/thrift store finds and manipulated them into a likeness. In the last few years, there have been some really high quality costume shops over seas. The prices overall are pretty good.

Check places like Amazon, eBay, and Wish for accessories or even full costumes

-Its not as good as other people’s

So what? Everyone started somewhere. Closet cosplay is totally a thing. What everyday stuff do you have that’s close to a character? HAVE FUN

If you see a character that looks interesting, but don’t know much about, do it anyway! Take the extra time and research the heck out of them. Find out what universe they’re in, who they interact with, their personality and mannerisms, etc. Go own it!

If you decide to join a semi-professional troupe, keep in mind that they will have standards. Take the time and read their guidelines. If they reject you, remember it isn’t YOU theyre rejecting, but the costume. Most will let you join in a helper capacity until you improve your costume. Listen to the feedback and make your adjustments. Also consider that there may already be 4 people playing your character and most events will only allow one of said character. Consider back up characters. Also sometimes events would like specific characters/groupings, so it doesn’t hurt to have multiple costumes

This was my first UBCon. I never went because I am not gamer and I didnt want to pay to walk around lol Without going into the incredibly huge backstory, I asked my friend who had a booth if she wanted me to help out, for multiple reasons, including a potential harasser.

Thankfully, we went without incident. I had a great time with my friend and her friends, getting to know them better and just being silly for a bit. I saw more friends than I expected and spent more on various wares than I wanted…so much for not spending any money lol

All in all, I had a nice time and I would come back next year.

Consider making a donation to help fund my costuming – I’d very much appreciate it!

This year, I am working on selling off unused costumes before buying anything major. Please visit on Facebook to see current listing.

Founding Member of the
Justice League of WNY, inc.

Visit JLWNY on Facebook
for all the latest information