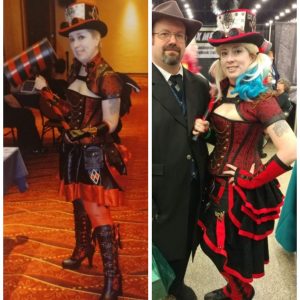 Thought I would post a picture showing what the first pass at my Steampunk Harley Quinn was like. I wasn’t sure if anyone would “get it,” but so many people did! I got a lot of compliments and was asked about steampunk by a few people. This encouragement led me to revamp it and make a better version.

This is what got my cosplay groove back. Its what made me get over my fear of sewing machines. It helped me be happy again.

Corset: The corset was always my starting point. I had been wanting it for years before I decided to use it for cosplay. Not shown, I have a friend who made me a leather purse I can attach to the corset and it will hold my phone, ID, and other small items. The corset comes with a little belting, but the pockets are too small.

Hat: Gotta have the top hat right? I bought a black hat from Spencer’s. My inspiration for it was my years in marching band, a demented circus ring master, and the Mad Hatter from Alice in Wonderland. Ive added a few more embellishments since I took my pictures. 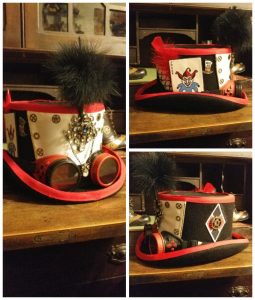 Hair: Before I was able to debut my costume, I lost my hair. I fried it with a bad batch of bleach (avoid splat). Prior to deciding to bleach my hair, I bought a wig from Savers. At the time, there weren’t a lot of options, so I grabbed that one because it was cheap. On the day of the con, I pulled out the wig, thinking it was ready to go I was wrong, it was a mess and nothing like the package and I ended up going without. You can see on the right that I got it somewhat styled.

Tights: I wear the tights in colder weather. At first, I was also more self conscious of my weight and the size of my thighs, but now Im ok with how they are.I still need to work on them – they’re my “tough” spot. In V1 I reversed them to be opposite of the Rubie’s gloves, but you really can’t do that when youre a girl with a large rear, so in V2, I wear them the way they’re intended. I got them on clearance at Hot Topic.

Fingerless Gloves: V1 – I bought Rubie’s fingerless gloves and quite frankly, they suck. the elastic at the arm holes only works if you have twigs for forearms. I removed them and put in bias tape and it was a little better. I ended up cannibalizing them later for the diamonds for my Bombshell Harley Quinn costume. V2 – I made my own with some trial and error. I put in brass d-rings and gears to  make it more steampunk. I made a full black set and a full red set, so I could switch the colors or use them for other outfits.

Skirt: This was the only piece I made in V1. I was not finding what I wanted already made so I bit the bullet and decided to conquer the sewing machine. V1 – Skirt I made with cheap satin and I used a tutorial online. I would make it a little differently knowing what I know now. I was also still using the possessed sewing machine, so that ate some of the fabric in places and it even broke a needle on the top layer 🙁 That machine almost conquered me :O V2 – Skirt is in 2 parts. The main skirt is a pattern I bought online. I added a slim pocket to the front, originally to hold my phone, but the corset makes it cumbersome. I use it for papers like programs now. I used a denim because I liked how stiff it was and also liked the embossing on it. It was also my first time putting in a zipper. It was unclear where the waist was meant to be, so I initially make it too big at the top, but easily fixed it. The bustle was from a simplicity pattern. I added a ton of embellishments to give it more of a steampunk feel. 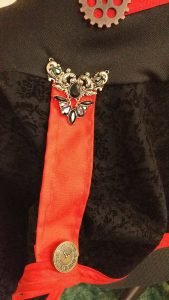 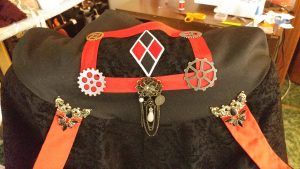 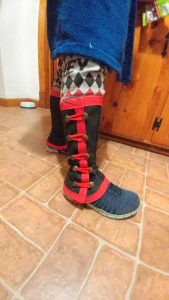 Footwear: In V1 I bought these awesome Demonia boots <3 I barely fit them at the time due to larger calves :*( I added Harley bows to the side. I only wore them to this event, so I am debating re-selling them. With having my New Rock red/black boots, I don’t know if I would get around to wear these. For V2 I went more steampunk and made gaiters with a pattern I bought online. I made a full black set and a full red set, so I could switch the colors or use them for other outfits.  They’re really easy to make. I used the same pattern for my steampunk jedi. For shoes, I alternate between patent marching shoes or pure black converse. Depends on the event.

If there is something else you want to see up close, LMK