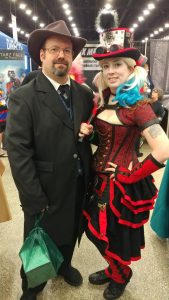 My older costumes were rarely hand made, because I didn’t know how to sew. I am quite adept at modifying and altering to get to what I want.

And yeah, I’m not a real blonde either.

Now that I’ve learned how to (mostly) use a machine, I’ve been making some of my own pieces. I still modify or buy if it suits me, is outside my current skill set, is exactly what I want, or is pretty damn nifty.

Several years ago, in an effort to be “managerial”, I stopped dyeing my hair fun colors, tried to look how people expected, and worked myself to the point of exhaustion that I no longer traveled to conventions nor desired to make costumes.

I no longer pursue that career path and my creativity is back. Once again, I have fun with my hair & clothes and I’ve fallen in love with cosplay all over again.

What turned my costuming bug back on was when my puddin’ and I were asked to photograph a friend’s wedding. It was a come as you are event and costumes were encouraged. My wheels spun for a bit. I had no money for anything new, but I had all these wonderful pieces I had collected and never worn through the years (I hoard pretty things, what can I say, I’m a magpie). I was able to put together my initial idea for a steampunk jedi, which went over very well. To be surrounded once again with people who appreciated my efforts was so amazing! I needed to do more!

Creating Steampunk Harley was a little bit of an evolution. After creating a steampunk jedi, I was initially going to go into the opposite direction with a steampunk sith. Once it started to form in my head, I realized that it was also pretty damn close to what I would envision a steampunk Harley Quinn would be. I debuted V1.0 at a small one day local comic-con and it went over crazy well! Once I got a sewing machine that actually worked, I went right ahead to upgrading and evolving the look.

Which leads us here, to this site. I hope to use it as a log of old and new costumes, sewing & craft fun, hopefully network and meet people/groups to participate with. Please feel free to contact me! I’m happy to help with bouncing ideas around.

And if you’re wondering why Harley Quinn is my primary cosplay persona, its because my husband says she reminds him of me 😀 <3 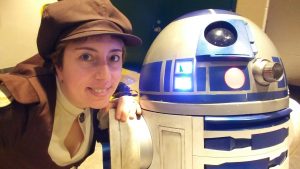