So since the holidays, admittedly, not a whole lot except trying to stay warm. I’ve been fortunate that MOST of the bad weather happened on the weekends, so I didn’t have to go out. I did get 2 paid snow day from work tho, so SCORE!

One of my cats is having teeth issues and had been hiding on us. Because he wasn’t eating, he dropped a ton of weight, which became obvious on a typically broad (but not fat) cat. We have been giving him extra feedings, which he has been very happy about. Unfortunately, the other cats have learned this and have started following us every time we go upstairs. My cats are all 16 this year, so I am very happy to see my Alpha kitty have his personality back. He has taken to exerting his dominance over my Goose plush-stand in -_-*** He spent all of the last two days doing this: 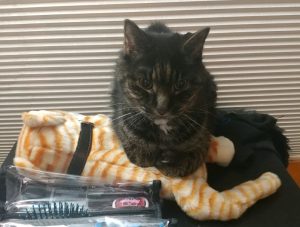 ….and YES, my Captain Marvel replacement did come in and ITS AWESOME! Its also THICKER than the previous model, so its a LOT warmer – its practically insulated. It might be an issue when the weather gets warm tho, so no sunny events come July LOL The more I wear it, the more it loosens up, so its been great. the only down side is that I didn’t specify the calf width and the boots don’t fit. I had to order a new set ;_; In the meantime, I’m wearing my black and red moto boots from New Rock that I usually wear with my Harley Quinn costume. Hey, it works!

Bob has taken some AMAZING portraits of me in this costume and he won’t let me share them until he publishes his book of cosplay composites…which will be FOREVER since he is on image 25 and he wants 100 ;_;

Tomorrow is the Captain Marvel fan event and I AM SO EXCITED! And yes, Im dressing up. Im also going with members of JLWNY on FRIDAY (also in costume). Its also pay day so I plan on buying the CM BUILD A BEAR because I am 😛 I’m probably always going to be 5 years old. Fight me 😀

Here’s a shot of me with my friend and amazing artist, Will Rodriguez of Creative Zenith <3