Here is another exciting edition of Review Wednesday! 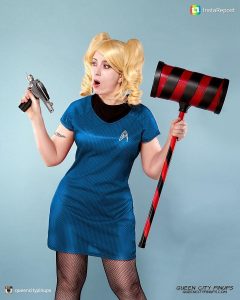 First up for today is our Star Trek Dress. This came out for the 2009 Star Trek movie. Its actually red for Uhura, but Bob turned it blue since Harley would OBVS be in the sciences.

We bought it at Party City for $15. It was a size medium, but fits snugly and is a little awkward in the armpit area. It does not have any give and isn’t a perfect replica, but for the price, its decent.

This version does not appear to be in stock anymore. There is only a deluxe for $49.99 that comes in 2 pieces. The one we bought is only one. I only bought this one because it was so low of a price, I would NOT have spent the money on the deluxe

The phaser is Bob’s that he had since the stone ages. I believe it came from an old model kit, but I could be wrong.

Fishnets are available from studio inventory. Not sure where we got them, maybe Spirit? 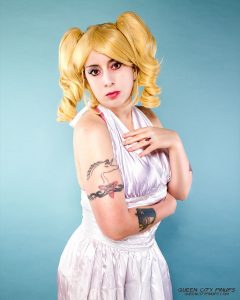 Happy Birthday Harley!
You too can channel your inner Marilyn at Queen City Pinups. It claims one size, but does fit oddly

This is a dress we picked up at Savers in the “used: section. The size claims OS, so we thought it would be great for our clients. The truth is, its OS for your boobs. The waist has a little give, but I wouldn’t go beyond a size 8.

Suffice it to say, I was a little disappointed.

It did fit me ok, with some work, mostly since I had the wig on. I could not get it to stretch over my hips and had to pull it over my head. Because the halter is a free size, its cut a little odd and didn’t look too good on me. Its not fitted, just kinda loose and hanging there.

I don’t remember what the company was that made this, but we didn’t pay a whole lot for it, so for the price it does give the look well, just don’t walk over any subway air vents.

All mentioned reviews are from items personally purchased by self or studio. I am not paid for my reviews. They are only here to inform consumers.