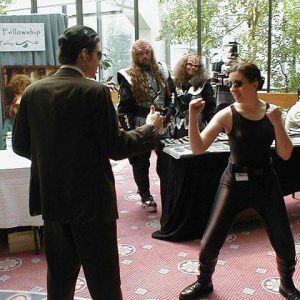 This TBT is from when I was Trinity from The Matrix at Toronto Trek many, many years ago.

This was a total cheat costume. Then again the last 2 years of my early cons were all cheater costumes LOLOLOL

This was a body suit I had bought in Austin, TX when I lived there. My boots are my L2 Raiders from Tomb Raider, my belt is an army belt, and the glasses I want to say were from a Burger King promotion from Wild Wild West. Or stolen from Bob. I slicked back my hair and called it a day. It still went over well.

There are a few more pictures up on my facebook page, although I seem to be missing the one where the Alien was hugging me :*( I did fight stormtroopers and Storm Shadow, and found Neo. Good times, better people!